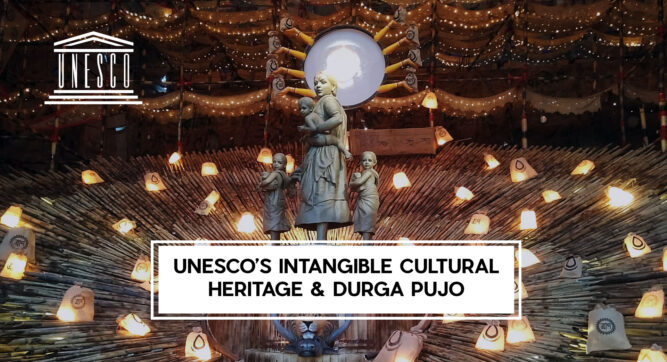 Legend has it that the shape-changing buffalo demon Mahishasura was creating havoc. Brahma, Vishnu, Shiva and the lesser gods were powerless to overcome him. Using their collective energy they created Durga to slay the demon. The 10-armed Goddess killed the demon king and ever since Durga Puja is celebrated by Bengalis to commemorate the victory of Good over Evil on earth.

This year, the emblematic celebration of the triumph of Good over Evil comes at a momentous time. Finally, it seems, the horror of the pandemic has been vanquished!
The festival is observed in the Indian calendar month of Ashwin – corresponding to September–October in the Gregorian calendar – as a ten-day festival of which the last five days are the most significant. What makes the festival most unique is that apart from this celebration of Good over Evil, Durga Puja is also a celebration of a divine home coming, for it is believed that it marks the Goddess’s visit to her natal home with her beloved children – Lakshmi, Saraswati, Ganesh and Kartik – before returning to her husband, Lord Shiva’s abode in Mount Kailash.

Primary celebrations begin on the sixth day (Shasthi), when the goddess is welcomed by an explosion of religious fervour and joyous festivities. Ask any family what it means to welcome their daughter (with her children) to her paternal home after an absence of a year… and you will appreciate what an emotional connect Durga Puja has with the people of Bengal!

Moreover, in December 2021, ‘Durga Puja of Kolkata’ took its place in UNESCO’s list of Intangible Cultural Heritage of Humanity. What a proud moment for us in Kolkata! It is the first Asian festival to receive this prestigious recognition. Apart from the honour, it is bound to bring international tourists who want to witness the grandeur of the Pujas, to Kolkata.

What was it that made it click? The answer could be the community Durga Puja pandals. Even though Durga Puja can be conducted in homes, it is the burgeoning community Pujas in public spaces in every neighbourhood, called pandals that have given it a carnival-like flavour. Each pandal is a temporary covered stage with decorated approach, showcasing the most exquisitely made 3D images of the Goddess along with her children, based on creative themes ranging from archaeological archetypes to contemporary critiques and social statements.

Apart from the sheer artistry, there is outstanding ingenuity displayed in the innovative use of traditional and unusual construction materials even in making the non-worshipped display idols. So much so that UNESCO, in awarding the heritage tag, has remarked, “Durga Puja is seen as the best instance of the public performance of religion and art, and as a thriving ground for collaborative artists and designers. During the event, the divides of class, religion and ethnicities collapse as crowds of spectators walk around to admire the installations.”

This outpouring of joy by millions – wearing new clothes, enjoying musical performances, revelling, giving gifts, feasting and pandal-hopping the whole night with family and friends – tearfully ends on the tenth day (Vijaya Dashami). The hundreds of pandal committees mount tableaus and embark on a procession carrying the worshipped masterfully designed clay idols to the river to immerse them. Lakhs line up the streets to bid the Goddess and her children farewell. Overnight the pandals and their exquisitely crafted themes are razed to the ground. Creativity that was birthed for 10 days is returned to the elements… to rise up as a phoenix from the ashes next year.

Gems Group salutes this colossal community celebration of a home coming that singularly encourages an unceasing renewal of creativity. In our endeavour of creating beautiful homes for diverse communities to live together, like Gems City near Joka Metro station, we find ourselves inspired by this ‘gem of a festival’. Fired by the thought that our Kolkata is the city where a religious festival has become a cultural and secular event and a space for social and artistic activities; recognised by the world as an Intangible Cultural Heritage of Humanity.